History of the Clawfoot Bathtub 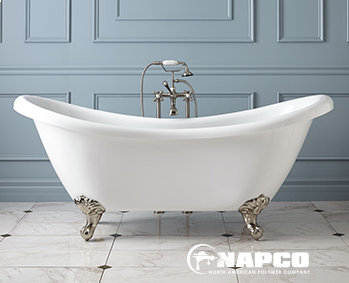 Though they were out of style for many years, interest in the clawfoot bathtub is being renewed as many of today’s homeowners are favoring an old-timey, vintage look instead of the sleek, contemporary designs often seen in new houses. At NAPCO, our refinishers are often asked to work on these types of tubs as owners wish to preserve the beautiful household fixture, but need help restoring the surface to working use. We thought it would be fun and informative to provide a brief history of this type of bathtub and why it is still so widely appreciated today! 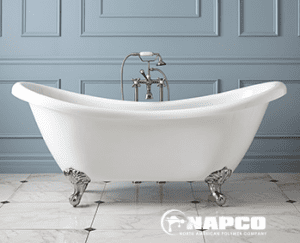 In the early 19th century, the production of cast-iron was brought over from England to the east coast of the U.S. Over the next few decades, cast-iron pipes and home appliances became more widespread, with the installation of a national plumbing code in 1848. In 1883, Kohler and the Standard Sanitary Manufacturing Company began working on a new surface coating for cast-iron tubs. The coating was made primarily of enamel and created a smoother, more easily cleaned surface.

Kohler’s clawfoot, cast-iron enamel tubs soon became extremely popular because their sanitary coatings helped to ward off disease-causing bacteria. They began mass-producing these tubs around the turn of the 20th century. After the end of World War I, the U.S. experienced a boom in housing production, and most new houses were equipped with modern plumbing amenities like a bathroom sink, toilet, and enamel-coated clawfoot tub.

Though less than 2 percent of Americans had indoor plumbing at this time, the popularity of the clawfoot tub continued to grow. Over the next several years, the design of the clawfoot tub evolved into one with a more enclosed style. Then, in 1928, the Crane Company introduced customizable color bathroom appliances. More and more families opted for indoor plumbing, as the tailored options made it an even more appealing amenity.

Today, many homeowners still wish to preserve their Victorian-era tubs as a unique piece of history. Even the production of new clawfoot tubs is on the rise, as people are replacing their average tubs with historical look-a-likes. NAPCO can certainly help homeowners maintain their old clawfoot tubs by refinishing their sanitary enamel coatings. We hope you enjoyed this bathtub history lesson and stay tuned for more!