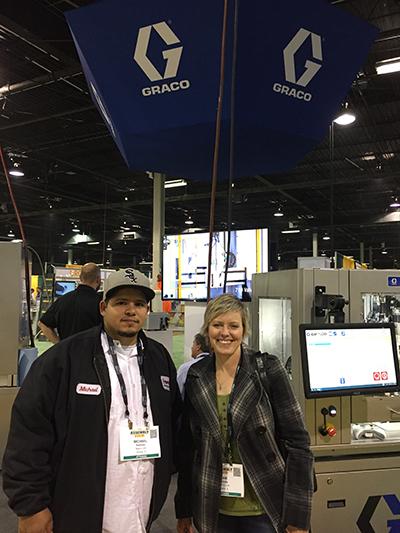 NAPCO's team at the 2016 ASSEMBLY Show

There were over 20 different presentations and workshops at the trade show including simulations for balancing mixed-model assembly lines, discussions regarding collaborative robotics, a panel discussion pertaining to recruiting and retaining women in manufacturing, and much more. Additionally, the keynote presentation was given by Ray Muscat, The University of Michigan entitled, “The Herman Miller Performance System Journey: Overcoming the Challenges of Implementing a People Focused Production System.”

Hundreds of companies had booths and were exhibitors at the ASSEMBLY Show three of which were AIR-VAC Engineering, Nordson Sealant Equipment, and Tutelar Technologies. NAPCO was also able to participate in networking opportunities with these vendors at both the ‘Taste of Rosemont’ Welcome Reception and the ‘Pub Night’ Networking Reception.

Dani Nichols, Vice President of NAPCO said, “We are eager to collaborate with our industry partners in order to discover new ways to make us better at what we do.” This unique trade show brought assembly processes to the next level once again, and encouraged suppliers, buyers, and users to explore all things “assembly.” The NAPCO Team was excited to attend this year’s ASSEMBLY Show and left with new professional connections, knowledge of innovative technologies, and assembly processes used throughout the industry.